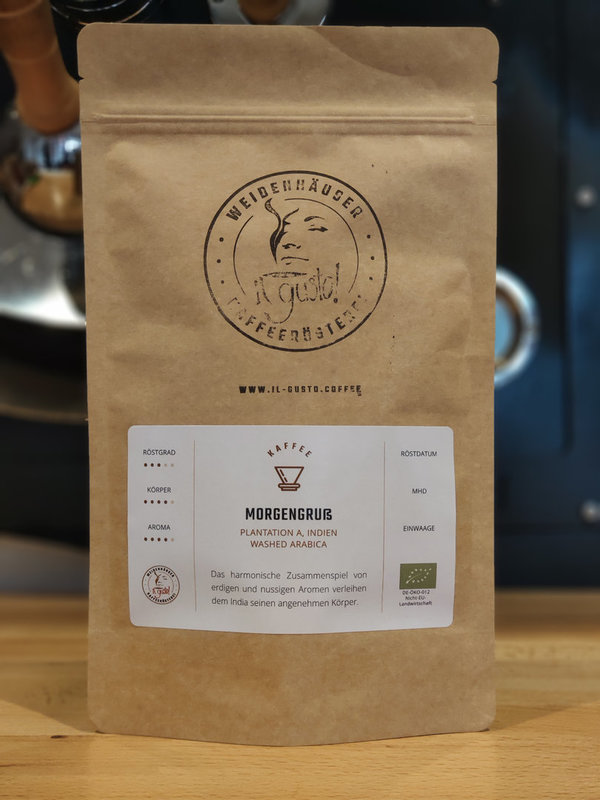 India is typically known for tea. However, the origins of coffee production root back to as early as 1670. Today, there are about 250,000 coffee growers in India – 98% of them being smallholders. The majority of India’s production takes place in the southern part of the country. In the very south, on the western Malabar Coast, the state of Kerala is situated. Known for its long history in organic cultivation it also holds a major biodiversity hotspot called the Western Ghats. Over 1,000 different species ranging from mammals to amphibians live here in their natural habitat. Within and along this green mountain range prevails an average temperature ranging from 23 to 30 Celsius degrees.

Keezhanthoor is a small village and lies amidst this fertile area. Two indigenous tribes populate this village: the Kollachuvayal and the Ullavayal. It is nestled along the Mannavan Shola forest and is a protected part of a national park. Thus, this coffee is perpetually shade-grown. It is also very common to grow spices such as cinnamon, clove, nutmeg and cardamom next to or even within the coffee plantations. The farmers of this village have been growing coffee for over 60 years. However, only a couple of years ago, the farmers also joined the MASS cooperative in an attempt to professionalize their coffee cultivation and marketing. The existing structures of MASS enabled the farmers to take part in agricultrual trainings, access medical services and even grant educational scholarships to children.

Coffee from this region typically has a spicy or nutty note, letting you enjoy it as a single-origin or using it as a special element for memorable blends